Another humiliating defeat for the Gunners, who were again porous in midfield and impotent in attack, thanks in no small part to poor tactics and team selection. 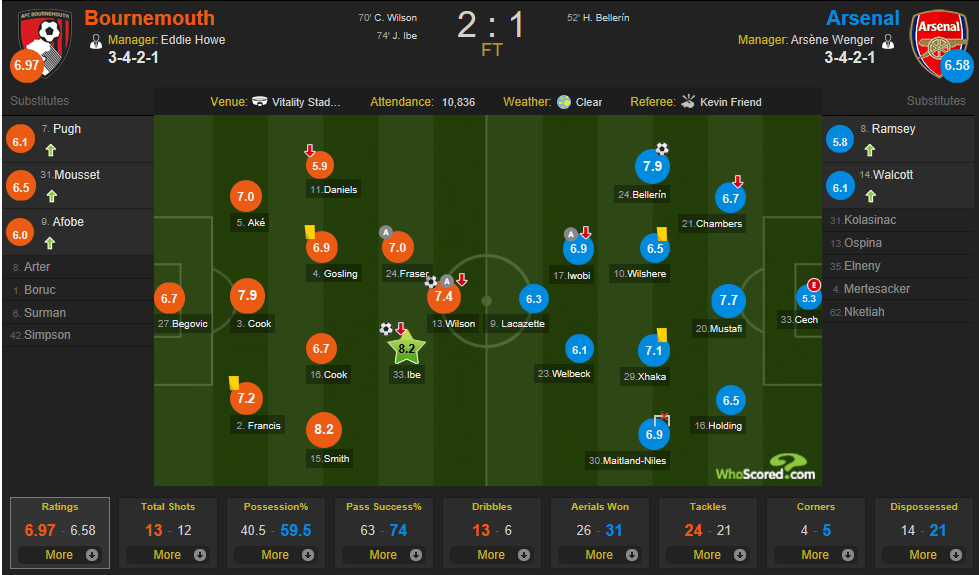 In terms of the individual performances of Arsenal’s players during the clash:

Not much Cech could have done about either goal. Overall he was solid as usual.

An aggressive tackling display by Bellerin (6 tackles). That said, he struggled positionally (1 interception) and again failed to cut out the crosses from his opponent Daniels. Offensively, the Spaniard was again very poor (despite the goal) with no forward dribbles and just 2 attempted (and inaccurate) crosses.

A relatively quiet day defensively for Chambers as Bournemouth channelled most of their attacking play down the opposite flank. Consequently, Chambers didn’t have many tackles (0) or interceptions (2) to make/win. That said, when required to defend he was no nonsense in his approach with 6 clearances and he was strong aerially when called into action (4 successful aerial duels).

A sensational defensive performance from the German with 4 tackles, 3 interceptions, 9 clearances and 11 successful aerial duels. By far and away Arsenal’s best on ground.

Unlike Chambers, it was a busy day defensively for Holding, as Bournemouth seemed to target him and Maitland-Niles. Despite the volume of traffic, he was very good with 3 tackles and 3 interceptions. Aerially he was also strong with 3 successful aerial duels. My only criticism of his performance is that he should have cleared the ball more when under pressure rather than attempt to play out from the back under those circumstances.

An underwhelming defensive performance by Ainsley (2 tackles and 1 interception) as his opponent Smith beat him via the dribble on at least 4 occasions. Offensively he was solid if unspectacular with 2 successful forward dribbles and 3 attempted (albeit inaccurate) crosses.

A poor defensive performance from Xhaka (1 tackle and 1 interception) as he struggled to stop his opponent Gosling when he surged forward. Offensively, Xhaka’s passing accuracy (83%) was again very good, though he wasn’t creative or risky enough with his passing (1 unsuccessful attempted through pass). That said, he showed some goal scoring intent though his shooting accuracy remains a problem (0 out of his 3 shots were on target).

A bad defensive effort from Wilshere (0 tackle and 1 interception) as he failed to put any sort of pressure on his young and inexperienced opponent in Cook. Offensively, his passing accuracy dipped (80%) from his usual high standards and like Xhaka he wasn’t creative or risky enough with his passing (just the 1 unsuccessful attempted through pass for the match). Jack did though show some goal scoring intent but his shooting accuracy let him down (0 of his 2 shots were on target).

A good performance from Iwobi, who registered a nice assist for Bellerin’s goal and had 2 shots for the match, one of which was on target. He also recorded 2 attempted through passes, one of which was successful and his 82% passing accuracy was also good.

Wenger’ experiment of playing Welbeck as a LCAM failed again. Welbeck again provided a very limited goal threat (only 1 attempted shot for the match), attempted no through passes and his passing accuracy was a poor 71%. Another selection bungle by Wenger.

Yet another difficult match for Lacazette as the likes of Bellerin, Xhaka, Iwobi, Wilshere, Welbeck and Maitland-Niles again failed to create clear cut goal scoring opportunities for him. As a Les Gones fan it is sad to see how Wenger is completely mismanaging him and failing him tactically.

With Alexis on the precipice of jumping ship and Wenger continuing to fail both tactically and with his recruitment and team selection, it baffles the hell out of me how an ‘elite’ sporting organisation like Arsenal is happy to not only turn a blind eye to the root cause of Arsenal’s issues (i.e. Wenger) but is happy to allow the source problem to spend more of the club’s funds on misguided transfers. For me, logic would dictate that Arsenal should address its quintessential footballing problem first (i.e. replace Wenger) and then back the future manager’s forays into the transfer market to best implement his tactical vision for the side.