A great outcome for Arsenal who appeared to adopt an oddly shaped 2-6-2 formation despite being setup in a notional 4-2-3-1 prematch. 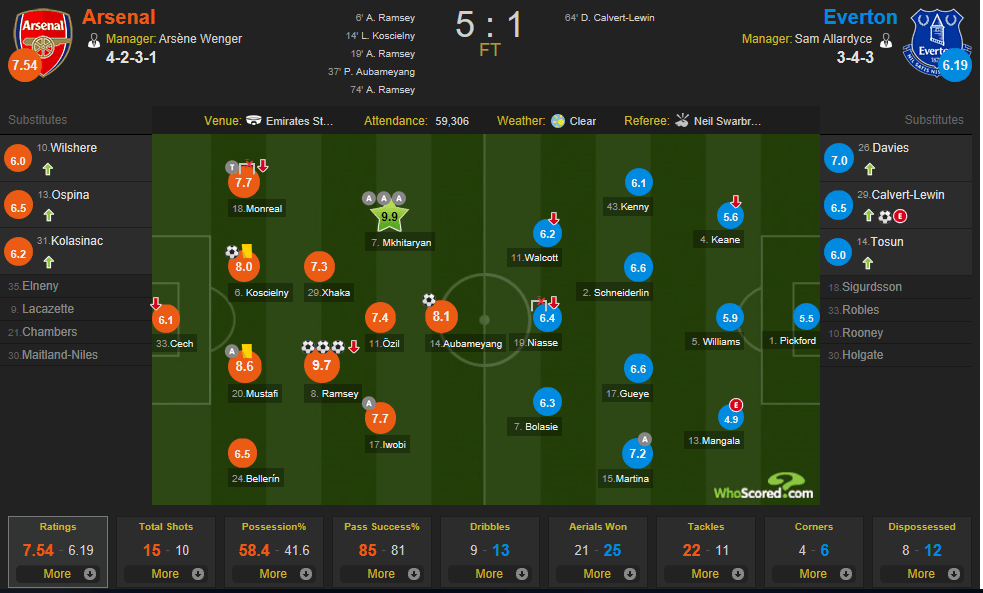 While Arsenal only marginally dominated possession (58% possession to Everton’s 42%), the Gunners were able to capitalise on Everton’s naive decision to commit players in attack and allow the game to become vertically stretched as opposed to adopting Swansea’s counter attacking template from Arsenal’s midweek loss.

GK: Cech
While he was forced off with an injury half way through the second half, up until that point, Cech was solid without being seriously challenged as Everton’s shooting was inaccurate (2 out of 11 shots were on target). He also did well when called upon to deal with Everton’s 22 crosses for the match.

RWB: Bellerin
A solid tackling performance from Bellerin (2 tackles). That said, Bellerin’s positional play was again poor (0 interceptions) and he failed to cut out his opponent Martina’s cross for Everton’s goal. Offensively, Bellerin showed very little attacking intent with his dribbling (1 successful forward dribble). While he showed more attacking intent with his crossing (2 attempts), accuracy was again an issue (0 accurate crosses from his 2 attempts for the match).

RCB: Mustafi
An excellent tackling display by Mustafi (5 tackles) but his defensive positioning wasn’t the best (1 interception). His main opponent Bolasie really struggled to make any impact on the game (0 shots on goal, no attempted through passes and 2 successful forward dribbles). In addition to his aggressive tackling, Mustafi kept his game nice and simple, reflected in a total of 8 clearances, and he was exceptional aerially (8 successful aerial duels).

LCB: Koscielny
A quiet day defensively for Koscielny (0 tackles and 2 interceptions) as his opponent Niasse struggled to make any impact on the game (2 off target shots and 1 successful forward dribble). That said, Koscielny could have been more aggressive in his tackling to snuff out the limited impact Niasse did manage to make. Koscielny also got beaten aerially against his opponent (3 successful aerial duel to his opponent’s 4 successful aerial duels). Nevertheless, like Mustafi, Koscielny kept his game nice and simple, with 9 clearances and he managed to pick himself up a goal for good measure.

LB: Monreal
A solid tackling performance from Monreal (2 tackles) but like Mustafi, his defensive positioning could have been better (1 interception). His opponent Kenny offer nothing in terms of a dribbling threat against Monreal (0 forward dribbles for the match). That said, Kenny did manage to attempt 3 crosses and while all 3 were inaccurate Monreal needed to be better at preventing Kenny’s crosses from getting into the box. Offensively, Monreal rich vein of form came to an abrupt ended as he failed to execute a successful forward dribble and just attempted the 1 (inaccurate) cross for the match.

RCDM: Ramsey
A mixed defensive display from Ramsey (1 tackle and 3 interceptions) as he positioned himself well but lacked aggression in his defensive approach. Offensively, he was clinical with his finishing, with 3 goals from his three shots on goal. Outside of his hat trick, Ramsey’s passing accuracy (91%) was excellent. That said, his transitional passing and dribbling was very poor (0 accurate long passes out of 1 attempt and 0 forward dribbles).

LCDM: Xhaka
An excellent defensive display from Xhaka (4 tackle and 2 interceptions) as he expertly screened Arsenal’s centre backs. Offensively, Xhaka’s passing accuracy (94%) was excellent, as was his transitional passing from defence to attack (4 accurate long passes out of 6 attempts).

RCAM: Mkhitaryan
A mixed night for Mkhitaryan with an underwhelming 1 successful forward dribble, 2 shot (1 of which was on target) and only 78% passing accuracy but a delightful through pass and a hat trick of assists. Like Ramsey, Mkhitaryan’s overall performance wasn’t great but his assist output was fantastic.

LCAM : Iwobi
A solid albeit slightly underwhelming performance from Iwobi, who positively recorded an assist, had 87% passing accuracy, 1 accurate through pass and 3 successful forward dribbles but had no attempts on goal. Despite his solid recent performances, I feel Iwobi will soon lose his spot in the starting 11 to Lacazette.

CF: Ozil
Like Iwobi, it was a solid albeit slightly underwhelming performance from Ozil who again took up more of a second striker role than a central attacking midfielder. While his passing accuracy was excellent (90%) and Ozil recorded 2 successful forward dribbles and a through pass, Ozil only had 1 shot for the match (which was off target).

ST: Aubameyang
A great start to his Arsenal career, with a goal on debut from his 3 shots, 2 of which were on target. Very interested to see how Aubameyang goes against a side that likes to park the bus.

A great outcome from Arsenal and there is a lot of this Arsenal squad that reminds me of the Borussia Dortmund side that dominated under Tuchel. That said, I’m reluctant to get too excited as but for his goal and a counter attack in the first half where he was released in on goal and had his shot saved by Pickford, Arsenal failed to create any further clear cut goal scoring chances for Aubameyang. That was down to Wenger’s trademark slow and largely purposeless passing approach (which is unlikely to change). In light of that and with most teams being unlikely to play so openly versus Arsenal as Everton did and I fear, like Lacazette experienced, clear cut goal scoring opportunities for Aubameyang will become increasingly few and far between as he and Arsenal face more teams happy to position themselves in a deep defensive block and play on the counter attack.

One Comment on “Arsenal Player Analysis: Arsenal vs Everton”