A lucky victory for the Gunners, in what was another disjointed and poor performance.

Surprisingly, Arsenal both setup in a 4-2-3-1 formation prematch and stuck to that formation in game. 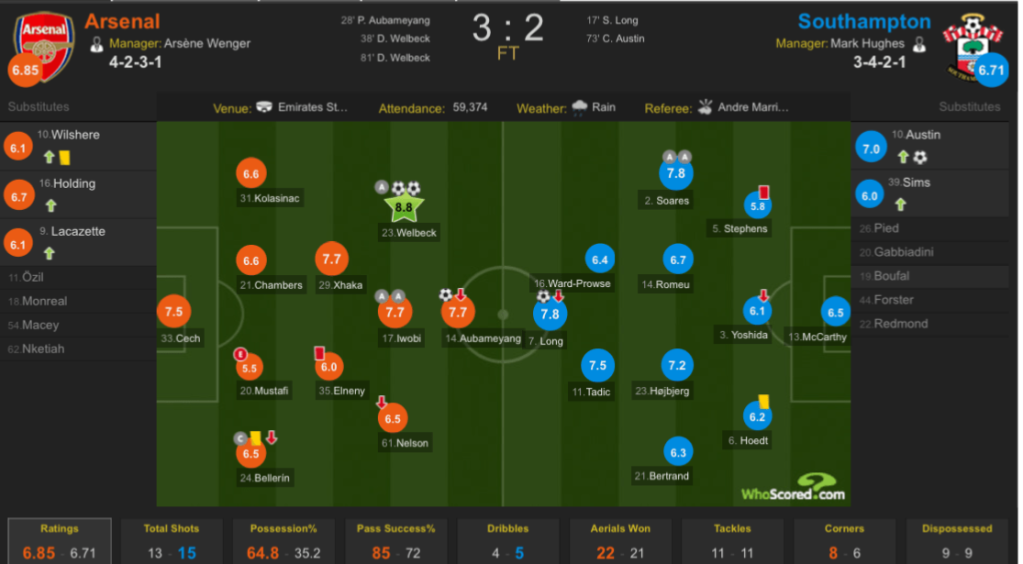 Despite Arsenal dominating possession (68% to Southampton’s 32%), the Gunners’ chosen attacking midfielders failed to regularly create clear cut goal scoring opportunities for the mobile and efficient Aubameyang and were fortunate that Welbeck’s repeated attempts on goal came off.

GK: Cech
It was a strong performance from Cech who produced 6 saves for the match and and did well when called upon to deal with the Saints’ 23 crosses. In terms of the goals Arsenal conceded, there was nothing Cech could have done to prevent either, with lazy defending from Kolasinac and Mustafi to blame for Southampton’s opener and a combination of poor defending from Wilshere and Chambers and some excellent approach play from the impressive Cedric responsible for Austin’s goal. 8/10

RWB: Bellerin
While his defensive anticipation was solid (2 interceptions), it was another match in which Bellerin struggled to effectively shut down his opponent, Bertrand, due to a lack of aggressiveness in defence (0 tackles). As a consequence Bertrand was able to attempt a number of crosses (4 crosses, none of which were accurate). Offensively, Bellerin was again poor, showing no attacking intent with his dribbling (0 successful forward dribbles) and just attempting the 2, inaccurate, crosses. Despite Bellerin’s ongoing run of poor form and being evidently ill suited to the right fullback position, Wenger continues to deploy the Spaniard in that role. 4/10

RCB: Mustafi
After a run of excellent performances from Mustafi, it was a match to forget for the German (0 tackles, 0 interceptions). At fault for failing to cut out cross which lead to the Saints’ opening goal, Mustafi was ousted by his main opponent on the day in Tadic (1 shot, which was on target, 2 successful forward dribbles and an accurate through pass). On the positive, the German was reasonably strong aerially (3 successful aerial duels) and he attempted to simplify his defensive approach and just clear the ball when it entered Arsenal’s defensive third (7 clearances). 5/10

LCB: Chambers
After an impressive performance versus Stoke on his last start, it was a dissapoointing effort from Chambers versus Southampton (1 tackle and 1 interception). At fault for failing to cut out Cedric’s low cross which lead to the Saints’ second goal, Chambers was well beaten by Shane Long, his opponent on the day (a goal from his 3 shots, 2 of which were on target). Chambers also lost the aerial battle with Long (2 successful aerial duels to Long’s 7 successful aerial duels). While Chambers did make some effort to simplify his defensive approach and just clear the ball when it entered Arsenal’s defensive third (4 clearances for the match), he could have done that with greater frequency to alleviate the pressure on Arsenal’s defence. 4/10

LWB: Kolasinac
A very poor defensive performance from Kolasinac (0 tackles and 0 interceptions) as his chief opponent in the match, Cedric, assisted both of Southampton’s goal with crosses from flank which the Serb was defending and threaten with 2 further crosses. Offensively, Kolasinac delivered a mixed performance, showing no attacking intent with his dribbling (0 successful forward dribbles) but attempting 3, albeit inaccurate, crosses. 5/10

RCM: Elneny
While Arsenal dominated possession, it was a much improved defensive performance from Elneny (2 tackles and 3 interceptions), who did his best to screen the space in front of Bellerin and Mustafi. Offensively, while Elneny’s passing accuracy (96%) was again excellent, his transitional passing (2 accurate long range pass) and transitional dribbles (1 successful forward dribble) were not enough to justify his selection in that deep central midfield role. 6/10

LCM: Xhaka
It was a mixed defensive effort from Xhaka, who was strong in his tackling (3 tackles) and disciplined in this defensive positioning but poor in terms of his defensive awareness (0 interceptions). Offensively, while Xhaka’s passing accuracy was very good (85%), his transitional passing (3 accurate long range passes) was substantially down on his typical level of production in that regard (6 long range passes) and he only made a solitary forward dribble. Overall, it an underwhelming performance from the Swiss. Hoping it is just a blip and not regression. 5/10

RCAM: Nelson
A shock starter and objectively it was a poor performance from the youngster, who failed to attempt a shot on goal, execute a forward dribble or attempt a through pass. His 91% passing accuracy spoke volumes of a nervous young player making sure he executed simple passes throughout. That said, if Nelson wants to meaningfully contribute to Arsenal’s play when occupying one of the attacking midfield positions, he will need to substantially increase his volume of dribbles, shots and attempted through passes. With so many of Arsenal’s attacking midfielders failing to produce in those key metrics, the opportunity is there for the youngster but Arsenal can’t afford to carry yet another unproductive player. 3/10

CAM: Iwobi
Despite grabbing two assists, it was an underwhelming performance from Iwobi (1 shot, 1 successful forward dribbles, 0 attempted through passes and 83% passing accuracy). Like Nelson, he will need to substantially increase his volume of dribbles, shots and attempted through passes, if he holds aspirations of meaningfully contributing in one of Arsenal’s attacking midfield roles. 5/10

LCAM: Welbeck
A mixed performance from Welbeck, who offered no real threat via the dribble (0 successful forward dribbles) nor attempted any through passes but showed excellent goal scoring intent (2 goals from 4 shots) and passed the ball with a good level of accuracy (82%). 6/10

Overall it was poor performance by Arsenal. The Gunners’ defence wasn’t proactive enough and Mustafi wasn’t able to bail out his underperforming defensive colleagues on this occasions. In central midfield, while Xhaka and Elneny were solid enough defensively, a lack of quick and direct transitional passing and dribbling from both players enabled Southampton to get numbers in defence and stifled the opportunities for Arsenal’s attacking midfielders to execute through passes for Aubameyang. Arsenal’s attacking midfielders also failed to provoke Southampton’s defence with limited forward dribbling attempts. That said, the shooting efficiency of Aubameyang combined with Webeck’s sheer persistence in terms of shooting attempts was enough to get the Gunners the three points in the end.