It was another unconvincing performance from the Gunners as they overcame Newcastle 2-1. 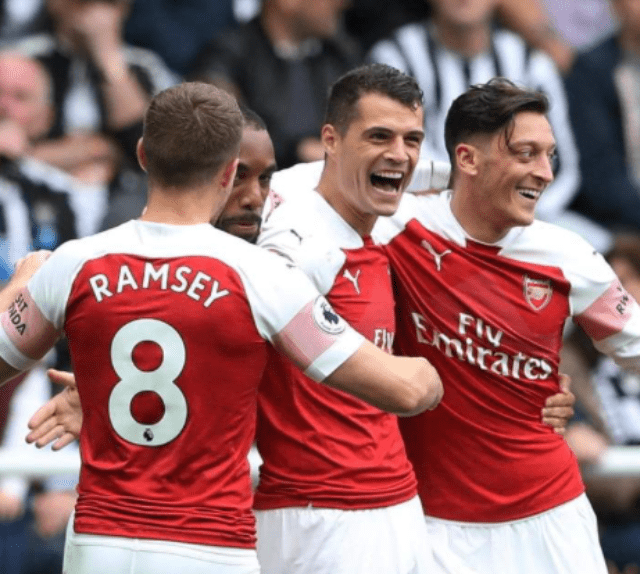 Pre-match, Arsenal appeared to once again adopt the 4-2-3-1 formation that Emery has favoured this season. That said, the players’ average positioning indicated that they adopted more of a 2-4-3-1 formation throughout the match, with Bellerin and Monreal occupying advanced positions on the right and left flanks respectively.

As was anticipated, Newcastle were happy to cede possession and counter attack using the flanks when the opportunity arose. This was reflected in Arsenal dominating possession (64% to 36%) and shots (12 to 4), but losing the ball recovery battle (15 tackles and 7 interceptions to Newcastle’s 20 tackles and 11 interceptions).

While Arsenal dominated the shot count, Arsenal only recorded 2 shots on target for the match. The Gunners’ efficiency in front of goal and/or the quality of the goal scoring opportunities they are creating needs to improve.

It was a quiet day for Cech, who, while conceding a late header from Clark, only had to deal with one other shot from Newcastle. On the goal conceded, there was nothing more Cech could have done. That said, Cech did well when called upon to deal with Newcastle’s 24 crosses for the game.

It was a poor defensive performance from Bellerin, who failed to demonstrate the necessary defensive anticipatory skills (1 interception) and was again passive in his defending (1 tackle). Bellerin’s defensive positioning was also too far advanced (again), which exposed Arsenal’s right flank to counterattacks from Newcastle. Bellerin’s primary opponent, Murphy, took full advantage of this with 3 crossing attempts during the match. Fortunately for Arsenal, none of Murphy’s crossing attempts were accurate.

Offensively, Bellerin’s performance was also poor. The Spaniard only attempted 1 cross for the match and he failed to significantly contribute to Arsenal’s transitional play via the dribble (1 successful forward dribble).

It was an underwhelming defensive effort from Mustafi. Despite demonstrating good aggression in his defensive approach (2 interceptions), the German failed to demonstrate the requisite defensive anticipatory skills (0 tackles).  That said, Mustafi largely contained his primary opponent, Aoyze Perez, who failed to produce a shot for the match. Positively, Mustafi was able to best his Spanish opponent aerially, registering 8 successful aerial duels to Perez’ 0. The German was also solid with respect to clearances (6 for the match).

It was a poor defensive performance from Sokratis. The Greek international both failed to demonstrate the necessary defensive anticipatory skills (0 interceptions) and, for the third match running, was not aggressive enough in his defensive approach (1 tackle). This allowed his opponent, Joselu, to pose some problems for Arsenal (1 shot, which was on target). And while Sokratis’ effort to clear his lines was solid (6 clearances), the Greek international lost the aerial battle with his opponent (8 successful aerial duels to Sokratis’ 3).

It was a poor defensive performance from Monreal, who failed to demonstrate the necessary defensive anticipatory skills (1 interception) and was again passive in his defending (1 tackle). Monreal’s defensive positioning was also too far advanced, which exposed Arsenal’s left flank to counterattacks from Newcastle. Monreal’s primary opponent, Ritchie, took full advantage of this with 9 crossing attempts, 2 of which were accurate.

Offensively, Monreal’s performance was also poor. The Spaniard only attempted 2 crosses for the match and he failed to contribute to Arsenal’s transitional play via the dribble (0 successful forward dribble).

It was an excellent defensive performance from the young and inexperienced Frenchman, as he demonstrated a good level of aggression in his defending (3 tackles) and showed solid defensive anticipatory skills (2 interception). The Frenchman’s defensive positioning was also good , in that he was reasonably disciplined and wasn’t drawn out of position and into advanced areas of the pitch too often.

While he was strong defensively, offensively, Guendouzi was very underwhelming. Despite recorded a crazy 98% passing accuracy, it was benign passing, and he only contributed 1 accurate, long range transitional passes, and 1 successful forward transitional dribble.

It was a slightly underwhelming defensive performance from Xhaka, who was not aggressive enough in his defending (1 tackle), but showed reasonable defensive anticipatory skills (2 interceptions). In terms of his defensive positioning, while Xhaka was disciplined to a degree, in that he wasn’t drawn into advanced areas of the pitch, he was arguably too left of centre in his positioning, which left Arsenal unnecessarily exposed centrally.

Offensively, Xhaka was highly productive, as he scored a goal from a well taken free kick, recorded 84% passing accuracy, and produced 7 accurate long-range transitional passes. The only real blemish on Xhaka’s offensive performance was once again his failure to contribute in terms successful forward dribbles for the match.

It was an improved attacking performance from Ozil, who scored a goal from his solitary shot for the match, attempted a through ball, managed 1 successful forward dribble and produced 3 key passes.  That said, for a player earning approximately £350,000 per week, significantly more on field production is expected.

It was a poor performance by Ramsey, who showed no goal scoring initiative (0 shots) and minimal desire to penetrate Newcastle’s rear-guard via the dribble (1 successful dribbles) or via attempted through passes (0 attempted through passes for the match). The only real positive was that Ramsey showed some creativity with his passing (2 key passes).

It was a poor performance by the Gabonese striker, who showed no desire to penetrate Newcastle’s rear-guard via the dribble (0 successful dribbles) or creativity with his passing (0 key passes). That said, Aubameyng did show some goal scoring intent, with 2 off target shots during the match, and notably attempted a through pass. Again though it was painfully obvious that Emery is limiting Aubameyang’s effectiveness by deploying the Gabonese striker out of position on the wing. Emery’s refusal to adopt a formation that would allow Aubameyang and Lacazette to act as a striking duo, and in turn play to their goal scoring strengths, is highly reminiscent of the stubbornness seen from Wenger in the second half of his tenure.

It was a trying but underwhelming performance by the Frenchman, who had 3 shots for the match, 0 of which were on target. While Lacazette battled his opponent, Fernandez, aerially, the taller and more physically opposing Spaniard was ultimately victorious (3 successful aerial duels to Lacazette’s 2).

Like the matches this season versus West Ham and Cardiff, Arsenal’s performance versus Newcastle was reminiscent of the side’s performances under Wenger during the second half of his tenure.  That is, Arsenal dominating possession but failing to create high probability goal scoring opportunities. The Gunners fullbacks also assumed positions far too high up the field, which exposed Arsenal’s centrebacks to dangerous crosses from Newcastle’s wide men.

Emery’s ongoing refusal to adopt a formation and tactical approach, that accentuates the strengths of Arsenal’s elite attackers (Aubameyang, Lacazette, Ozil), and reinforce Arsenal’s central midfield with an additional body to protect the defence, is a concerning trend.

Until Emery becomes more willing to adapt his approach to accentuate the strengths and mitigate the weaknesses of the elite players currently at his disposal, while pragmatically protecting Arsenal’s defence, Arsenal will continue to deliver unconvincing performances.