Who should replace Emery? Jorge Sampaoli?

With Unai Emery relieved of his managerial duties at Arsenal, the question is who Arsenal should replace him with. This mini-series focuses on a select number of prospective managerial candidates and their tactical philosophies. Next up is current Santos manager Jorge Sampaoli.

As a self-declared disciple of Marcelo Bielsa, Sampaoli is a firm believer in a particular attack minded approach, which he has shown to employ, whether home, away, against the worst or best teams in the world. Like his mentor Bielsa, Sampaoli’s sides are typically known for their high and aggressive pressing, movements and positioning, verticality and overlapping fullbacks.

Sampaoli also likes his sides to play the game in the opposition half as much as possible. The defenders position themselves on the halfway line as the forwards and midfielders make a lot of vertical movement into the opposition area overloading the space between the lines.

In terms of formations, Sampaoli often employs a 3-4-1-2, which depending on the opposition can be moulded into a 4-3-1-2, 3-5-2 or 3-2-3-2. Typically, Sampaoli uses a three-man defence when his sides’ face opponents which deploy two forwards, as he always wants an extra man in defence. Against a lone striker, Sampaoli will normally deploy two center backs in a back four.

Sampaoli is also a big fan of playing out from the back. Specifically, his sides have a tendency to circulate possession in their own half to find gaps before switching to a very quick and vertical approach as they enter the opposition area.

As a result, when Sampaoli uses a back three, the central defender is often a deep lying midfielder. Alternatively, in a 4-3-2-1 shape, a deep lying midfielder will normally drop into the defence as the centre halves spread apart to form a three man backline which prompts the vertical movement of Sampaoli’s very attacking fullbacks.

The threat of Sampaoli’s attacking fullbacks creates space in the channels for his side’s quick wide forwards. The fullback overlapping runs normally occupy opposition fullbacks which gives room to the wide forwards to move into more central zones.

In midfield Sampaoli, like Bielsa, demands a lot of his two box-to-box midfielders, who in addition to ferociously pressing opponents, are also expected to make a lot of forward runs to creates space for the team’s forwards.

Up front, the 54-year-old stations quick wide forwards in attack with a highly technical player playing in a number 10 role. In this system, the wide forwards attack the channels while the fullbacks provide width, allowing space in the middle for the number 10.

The number 10 plays a key role in Sampaoli’s side. His job is to keep the midfield ticking and to serve as a creative hub linking the midfield and attack. Sampaoli’s attacking ideology is fixated on the creation of wide and central overloading of an area. As such, Sampaoli’s sides tend to keep a close distance between each other in offense, giving more numbers and depth for their attacking philosophy. The number 10 is critical in such situations, as he is able to create angles for teammates.

Without the ball, Sampaoli’s sides are one of the most aggressive, due to their intense pressing to regain possession. Sampaoli instructs his team to press in a high block, blocking passing lanes for opponents.

Their aggressive pressing isn’t just to regain possession for circulation. Rather, Sampaoli’s sides press as a form of attack. Like Bielsa, Sampaoli’s of the view that pressing high up the pitch gives you a better chance of scoring because you’re closer to goal if you win possession, rather than having to construct a move from the back.

Sampaoli’s teams press in a fluid system and have many pressing triggers. For example when the ball is played to a player facing his own goal or when the opposition get the ball near the touchline. In these situations, his sides compress the space using the touchline as an extra defender to further reduce their opponent’s options.

While Sampaoli’s recent experience with the Argentine national team was one to forget, his impressive performances as the manager of Sevilla, Chile and the Universidad de Chile, and his attacking football philosophy, which is very much in the mould of Bielsa, would seem to fit Arsenal, and give the side an identity which it is currently missing.

Based on his tactical approach and Arsenal’s current squad, an Arsenal side under Sampaoli’s guidance might look something like this: 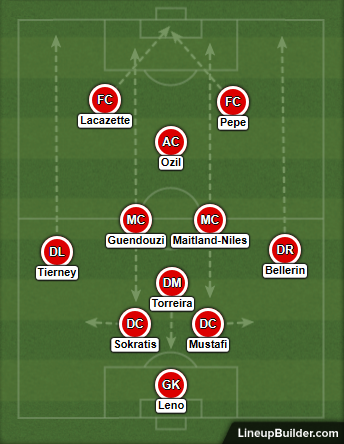 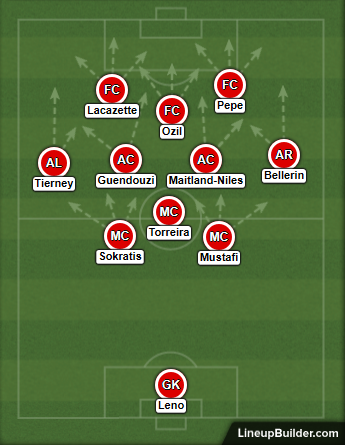 If the Argentine was to be appointed, he would certainly bring back some excitement to the Gunners’ attacking play.