A humiliating defeat for the Gunners, who failed to execute in key positions, thanks in no small part to poor team selection and tactics.

Arsenal returned to a notional 3-4-2-1 formation prematch and largely stuck to that structure throughout the match. That said, Arsenal’s central midfield again positioned themselves far too high up the pitch as did Arsenal’s the wingbacks , which left Arsenal’s central defenders exposed and stretched horizontally. 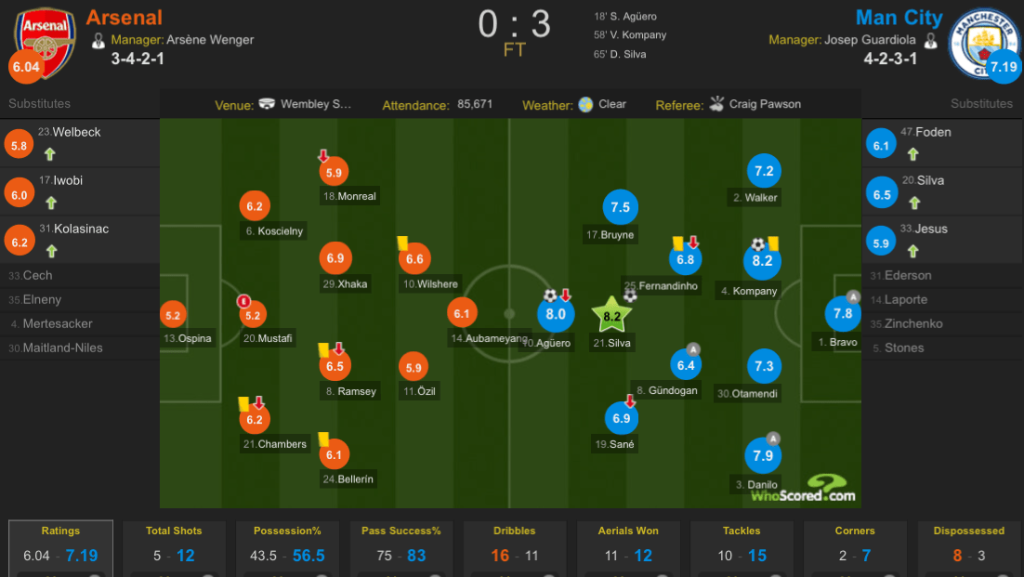 With Arsenal facing a team with a greater desire to retain possession (reflected in Man City’s 57% possession to Arsenal’s 43%), this match presented Arsenal with a rare opportunity to focus on counterattacking and using he vision of Ozil and Wilshere and the speed and off the ball runs of Aubameyang in attack. However, poor attacking execution from Ramsey, Wilshere and Ozil cost the Gunners.

In terms of the individual performances of Arsenal’s players during the clash:

GK: Ospina
Ospina wasn’t at fault for any of the goals and was strong when required to take action on Man City’s 12 crosses for the match.

RWB: Bellerin
It was a relatively quiet day defensively for Bellerin as his opponent Sane (1 off target shot, 2 successful forward dribbles, 2 inaccurate crosses) struggled to make an impact. That said, Bellerin struggled again with his defensive positioning (0 interceptions). Offensively, while the Spaniard’s transitional play (2 forward dribbles) was solid, his end product was non existent (0 attempted crosses).

RCB: Chambers
While he was turned by Silva for Man City’s 3rd goal, it was a strong defensive showing by the young Englishman (2 tackles, 4 interceptions and 6 clearances). One of the few Arsenal players who produced on the day and his reward from Wenger was to be hauled off after 64 minutes.

CB: Mustafi
A very poor defensive performance by the German with a positional error for Man City’s opening goal and just 1 tackle and 1 interception. But for the inaccurate shooting of Mustafi’s main opponents on the day, Aguero (3 inaccurate shots from his 4 attempts), the final score could have been much worse for Arsenal. That said, Mustafi did attempt to relieve the pressure on Arsenal’s defence at times with 4 clearances and was solid aerially with 3 successful aerial duels.

LCB: Koscielny
It was an underwhelming performance by Koscielny (2 tackles, 0 interceptions and 2 clearances). While his main opponent on the day De Bruyne was solid at best (2 inaccurate shots, 2 forward dribbles and 1 inaccurate through pass), Koscielny was not aggressive enough in his defending to put the Belgian under any sort of pressure. His aerial strength (4 successful aerial duels) was the one positive from his performance.

RCM: Ramsey
While his defensive positioning was at times okay (2 interceptions), Ramsey was simply too passive defensively (1 tackle) as he failed to effectively protect Arsenal’s back three. Offensively, Ramsey’s passing accuracy was woeful (63%), he largely failed to transition the ball from defence to attack (2 forward dribbles and just 1 accurate long range pass) and showed no creativity or risk with his passing (0 attempted through passes for the match). Ramsey also failed to show any real goal scoring intent, with just the 1 shot for the match. Put simply it was a bad performance from the Welshman and another example of how he does not suit playing in a 2 man central midfield.

LCM: Xhaka
Xhaka showed some excellent defensive awareness in the match (4 interceptions) but like Ramsey, he was nowhere near aggressive enough defensively (1 tackle). Offensively, while Xhaka’s passing accuracy (78%) was below his normally high standard and he wasn’t creative or risky enough with his passing (0 attempted through passes), his transitional play was very good (6/8 accurate long range passes and 3 forward dribbles).

RCAM: Ozil
A woeful performance from Ozil who only attempted 1 forward dribble for the match and failed to attempt a shot on goal or a through pass. Combine that with a significant drop in his passing accuracy (76%) and it was a match to forget for the German.

LCAM: Wilshere
A mixed and slightly underwhelming performance by Wilshere who tried his hardest to penetrate Man City’s rearguard with 6 successful forward dribbles. While his passing accuracy (83%) was also very good, his end product in terms of through passes and shots were lacking (0 attempted through passes and just 1 inaccurate shot).

CF: Aubameyang
A very difficult game for Aubameyang. But for a weak cross from Ozil and a hopeful long ball, which Kompany swept up majestically, Aubameyang was deprived of any clear cut goal scoring opportunities. Given Aubameyang’s proven goal scoring record, his 1 shot for the match (which was on target) tells the story of a manger whose tactical system, like in the recent loss to Spurs, failed to accentuates Aubameyang’s strengths and exposed his weaknesses.

Overall it was a pretty depressing experience for Gunners fans and a poor performance from the team. With the exception of Chambers and to a lesser extent Xhaka and Aubameyang, Arsenal’s players underperformed. Maybe it’s the optimist in me but I can’t help but feel that Gazadis in sanctioning the purchases of proven attacking talents in Lacazette, Aubameyang and Mykhitaryan this season has issued a final challenge to Wenger to prove during the second half of this season that he still has the tactical capabilities to covert Arsenal into a genuine Premier League title challenger for next season. If Wenger’s fails to prove his tactical nous in the next six months, it will give Gazidis all the ammunition he needs to call for Wenger’s tenure to come to a close at season’s end. If my assumptions are correct, Arsenal should have a new manager come the start of season 2019/2020.