It was an inept performance from the Gunners who once again over committed players in advanced positions, exposing Arsenal’s central defenders and we’re too cautious in attack, which failed to
create clear cut goal scoring opportunities for Aubameyang.

While Arsenal setup in a notional 4-2-3-1 formation prematch, they appeared to adopt more of a 2-3-5 formation in game. 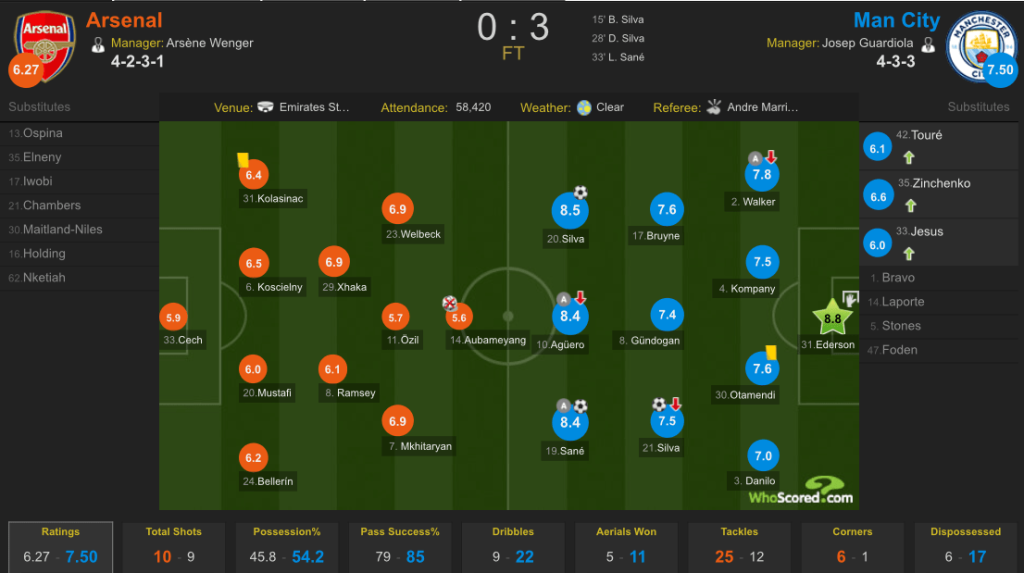 While Man City only shaded possession (54% to 46%) they were far more purposeful in attack and defence than the Gunners, owing much to the tactical astuteness of Guardiola and Wenger’s lack thereof.

GK: Cech
It was a solid performance from Cech, who wasn’t responsible for any of the 3 Man City goals Arsenal conceded and made 2 further saves to limit the damage. Cech wasn’t really called upon aerially as Man City kept the ball on the ground in attack to play to the strengths of Aguero, David Silva, Sane and Bernardo Silva

RWB: Bellerin
It was a solid tackling performance from Bellerin (2 tackles) but yet again his defensive positioning let him down (1 interception) as his opponent Sane, dominated the Spaniard (6 successful forward dribbles, an assist and a goal from his 1 shot for the match). Offensively, while Bellerin showed some attacking intent with his crossing (3 inaccurate crossing attempts), his accuracy again let him down and he only recorded 1 successful forward dribble for the match. Despite being out of form both defensively and offensively, Wenger continues to select the Spaniard in the right fullback position due to their personal relationship. I think the time has come for Arsenal to give Jenkinson or Debuchy an opportunity…wait a minute…Wenger sold or loaned out all or Arsenal’s alternative right fullbacks. Another masterstroke decision from the Frenchman.

RCB: Mustafi
An aggressive tackling performance from Mustafi (4 tackles) but his positional play was poor (1 interception) and he was drawn too far right from centre in an attempt to cover Bellerin’s poor defensive positioning. As a consequence, his main opponent on the day Aguero was able to heavily influence the match (4 shots, 2 of which were on target, an assist and 5 successful forward dribbles). Mustafi also failed to simplify his game and just clear the ball when the opportunity arose (2 clearances for the match). Aerially he wasn’t challenged at all. Overall it was a disappointing performance by Mustafi, though a lot of his struggles in this match can be attributed to the poor defensive positioning of both Bellerin at RWB and Ramsey at RCM, which left the German on an island to try and defend against the attacking thrusts of David Silva, Sane and Aguero.

LCB: Koscielny
An excellent defensive display by Koscielny (5 tackles and 2 interceptions) who bounced back from his disappointing showing in the League Cup final to effectively shut down his main opponent in this match in De Bruyne (1 shot, 2 forward dribbles and 1 accurate through pass from his 1 attempt). While aerially he wasn’t challenged, Koscielny could have simplified his game at times and just cleared his lines to relieve the pressure on Arsenal’s defence (2 clearances). Nevertheless, it was a strong showing from the Frenchman.

LWB: Kolasinac
It was an underwhelming performance by Kolasinac. While his defensive positioning was great (4 interceptions), which largely eliminated the threat of his opponent Bernardo Silva (1 goal from his 1 shot for the match and 2 successful forward dribbles), he could have been more aggressive in his defensive approach (1 tackle). Offensively, while he was very poor (1 successful forward dribble and 1 accurate cross from his 1 attempt). The Serb’s confidence has obviously been affected by Wenger’s decision to withdraw him from the first 11, despite Kolasinac being clearly the strongest left fullback at the club.

RCM: Ramsey
It was a woeful defensive performance from the Welshman (0 tackles and 0 interceptions) as he completely abandoned his positional and defensive duties to individually pursue goals and assists. Offensively, Ramsey’s passing accuracy was very good (85%), he effectively transitioned the ball from defence to attack (2 forward dribbles and 4 accurate long range passes) and he showed some, albeit limited, creativity or risk with his passing (1 attempted through pass for the match). It was yet another performance from the Welshman which highlighted how his defensive ill discipline makes him poorly suited to playing in central midfield.

LCM: Xhaka
It was an excellent tackling display from Xhaka (6 tackles) as he worked extremely hard to try and single handily protect Arsenal’s centre backs, given Ramsey’s decision to abstain from his central midfield defensive duties. While Xhaka was nice and aggressive in his defensive approach, his defensive positional play was generally poor (1 interception). Offensively, while Xhaka’s passing accuracy (85%) and transitional passing (4 accurate long range passes) was very good, he wasn’t creative or risky enough with his passing (0 attempted through passes) and he failed to transition the ball forward via the dribble (0 successful forward dribbles). That said, it was a good performance from the Swiss though he needs to focus on trying to deliver complete defensive performances (i.e. both tackling and his positional play).

RCAM: Mykhitaryan
It was a poor offensive performance from the Armenian, with only 1 successful forward dribble, 71% passing accuracy and no attempted through passes. The only real positive was that he showed some goal scoring intent with 2 shots for the match, 1 of which was on target. It has been an inauspicious start to Mykhitaryan’s Arsenal career. That said, given his highly productive career numbers to date, the big question is whether it is simply Mykhitaryan underperforming or Wenger’s tactics failing to allow the Armenian to consistently demonstrate his undoubted skill set

CAM: Ozil
It was another woeful performance from Ozil who failed to attempt a forward dribble or through pass for the match and only had 1 (off target) shot. Combine that with a significant drop in his passing accuracy (77%) and it was another match to forget for the German.

LCAM : Welbeck
Like Ozil and Mykhitaryan it was a dreadful performance from Welbeck who Wenger shoehorned into a unfamiliar LCAM role to ensure one of his favourites was included, despite his recent poor form. While the Englishman completed 2 successful forward dribbles, he failed to attempt a through pass for the match, only had 1 (off target) shot and recorded a woeful 68% passing accuracy. It’s these types of team selections, based on personal relationships rather than on field performances, which continue to bring Wenger and Arsenal unstuck.

ST: Aubameyang
It was yet another difficult game for Aubameyang who, like Lacazette experienced, is being was deprived of any service from Arsenal’s slew of so call creative midfielders and attacking wingbacks. He ended the match with no goals from his 2 shots, one of which was the on target penalty that was saved by Ederson.

It was the same old same old problems for Arsenal in this match. A lack of protection for Arsenal’s centre halves, particularly from Bellerin and Ramsey for Mustafi, and poor offensive play from Mykhitaryan, Ozil and Welbeck left Aubameyang isolated and without clear cut goal scoring opportunities. While a less skilful opponent in Brighton should enable Arsenal to assert themselves in their next Premier League match, Arsenal are slipping further and further behind the likes of Man City, Liverpool, Man Utd, Chelsea and Tottenham the longer Wenger remains in charge.