It was a much-improved attacking display from the Gunners versus Burnley, as they recorded a comfortable 5-0 victory.

Pre-match, Arsenal appear to switch to the experimental 4-3-3 formation that Wenger has been employing on and off in recent weeks. That said, the players’ average positioning indicated that they adopted a formation that more closely resembled a 4-1-2-2-1 set up. 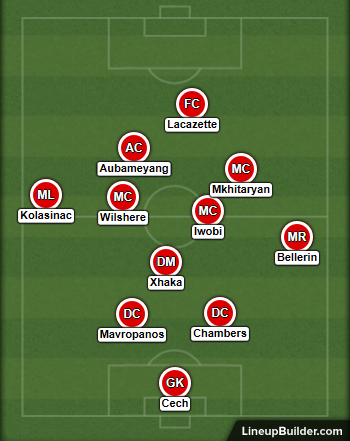 With Burnley’s success this season having been built on their ability to establish a resolute deep defensive block and counterattack through direct transitional play, and Wenger’s unwavering preference for Arsenal to hoard possession of the football, it was no surprise to see Arsenal dominate the possession stakes (64% to Burnley’s 36%).

That said, the difference between Arsenal’s performance versus Burnley and recent matches in which Arsenal have, or been allowed to, dominate possession, is that versus Burnley, Arsenal played to the respective attacking strengths of their chosen central midfield (Xhaka (transitional passing), Wilshere (forward dribbles) and Iwobi (forward dribbles)) and Arsenal’s attacking trio of Mkhitarayn, Lacazette and Aubameyang were highly efficient.

This combined with Burnley’s inability to accurately transition the ball from defence to attack, gave Arsenal the platform to dominate both in terms of possession and the creation of high probability goal scoring opportunities.

It was a quiet day for Cech, as Burnley, who ceded possession and employed a deep defensive block, struggle to effectively transition the ball from defence to attack, which restricted their shooting attempts to just 6 shots for the match, 2 of which were on target. That said, Cech maintained his concentration and was able to comfortably save Burnley’s 2 efforts on target. Cech also did well when called upon to deal with Burnley’s 18 crosses for the match.

It was a mixed defensive performance from Bellerin, who showed some aggression (2 tackles) but failed to demonstrate sufficient defensive anticipation (0 interceptions). As a consequence, his opponent, Gudmundsson, caused Arsenal grief on the Gunners’ right flank (8 crossing attempts, 3 of which were accurate, 1 shot, which was on target, and 2 successful forward dribbles).

Offensively, Bellerin’s crossing accuracy was excellent (2 assists from his 2 attempted crosses for the match). That said, the number of crosses the Spaniard attempted (2) and the number of transitional and attacking dribbles he made (2), relative to Arsenal’s possession, was somewhat underwhelming.

It was another good defensive performance from Chambers, who demonstrated strong defensive anticipation (3 interceptions) and solid aggressiveness (2 tackles). As a result, his primary opponent, Hendrick, was limited to just 2 off target shots and 2 forward dribbles. While Chambers wasn’t challenged aerially by his opponent, he did at times over complicate his game when the ball entered Arsenal’s defensive third. Specifically, Chambers got caught when trying to creatively pass the ball out from the back, when he and Arsenal would have been better served had he simply cleared his lines (2 clearances).

It was another mixed defensive performance from youngster Mavropanos. Positively, the Greek again demonstrated excellent defensive anticipation (3 interceptions) and did well when he simplified his defensive approach and focused on clearing his lines (6 clearances). That said, Mavropanos was again too passive defensively (0 tackles). Luckily his main opponent, Vokes, failed to demonstrate sufficient initiative to take advantage of Mavropanos’ reluctance to tackle (1 shot, which was on target, and 0 successful dribbles). Aerially, while the young Greek certainly didn’t back down from any duels, he ultimately lost his battle against his physically imposing opponent (10 successful aerial duels to 4).

It was a very quiet day defensively for Kolasinac, as his opponent, Lennon, failed to seriously test the Serb (2 attempted but inaccurate crosses and 1 forward dribble). That said, had Kolasinac demonstrated greater aggressiveness (0 tackles) and showed enhanced defensive anticipation (1 interception), he could have eliminated the minimal threat Lennon caused.

Offensively, Kolasinac’s performance was mixed. On the plus side, he scored a cracking goal and showed plenty of attacking intent with his crossing (4 attempted crosses for the match). That said, Kolasinac’s effort in terms of transitional and attacking dribbles (1 successful forward dribble) was very disappointing.

It was an indifferent defensive performance from Iwobi, who showed solid defensive anticipation (2 interceptions) but lacked aggressiveness in his defensive approach (1 tackle). While Burnley didn’t offer much in terms of an attacking threat, Iwobi’s defensive positioning was disappointing, as he left too much space between himself and Chambers and Bellerin, which exposed Arsenal’s right wingback and centreback to potential counterattacks from Burnley down Arsenal’s right flank.

Offensively, Iwobi was excellent, with a well struck shot from an Aubameyang cut back, 92% passing accuracy, 2 successful forward dribbles, and an accurate through pass. My only criticism of the young Nigerian’s attacking performance was his limited transitional passing (1 accurate long-range pass). That said, given Wenger’s tactical decision not to deploy any attacking midfielders between Arsenal’s central midfield and forward lines, Iwobi’s passing creativity and forward thrusts in the attacking third were essential.

It was a similarly indifferent defensive effort from Xhaka, who was aggressive enough in his approach (2 tackles) but failed to showcase his defensive anticipatory skills (0 interceptions). That said, Xhaka’s defensive positioning was very good, as he screened the space in front of Arsenal’s centrebacks Chambers and Mavropanos.

It was a poor defensive performance from Wilshere, who demonstrated a lack of defensive anticipatory skills (0 interceptions) and lacked aggressiveness in his defensive approach (0 tackles). Like Iwobi, Wilshere’s defensive positioning was also poor, as he left too much space between himself and Mavropanos and Kolasinac, which exposed Arsenal’s left wingback and centreback to potential counterattacks from Burnley down Arsenal’s left flank.

Offensively, Wilshere was excellent, recording 91% passing accuracy, 2 successful forward dribbles, and an assist for Kolasinac’s goal, from his 1 attempted through pass for the match. My only criticism of Wilshere’s attacking performance, like that of Iwobi, was his transitional passing (0 accurate long-range passes) which was sorely lacking. That said, with Wenger not deploying any attacking midfielders between Arsenal’s central midfield and forward lines, Wilshere’s creative passing and dribbling in the final third were vital, as it enabled Arsenal to convert Xhaka’s accurate and direct transitional passes into goal scoring opportunities for the Gunners.

It was an excellent performance from Mkhitaryan, who show great goal scoring initiative (3 shots, 1 of which was on target) and a desire to penetrate Burnley’s rearguard via the dribble (3 successful dribbles). His passing creativity was also very good, with 1 accurate through pass from his 2 attempts.

It was a clinical performance from Lacazette, who scored a goal from his 2 shots for the match. The French striker also registered an assist for Aubameyang’s opening goal, with a low and hard cross from the right. In addition, the Frenchman made several well-timed off the ball runs in behind Burnley’s backline. All-in-all an impressive performance.

Despite being misused by Wenger and played out of position, it was an excellent performance from Aubameyang, who showed great goal scoring initiative and efficiency (2 goals from his 2 shots for the match), provoked Burnley’s defence via the dribble (2 successful dribbles) and registered a nice assist for Iwobi’s goal with a cut back from the by-line.

Overall it was a much-improved attacking performance from Arsenal, in the last home match of Wenger’s tenure.  It was great to see Arsenal actually play to the respective attacking strengths of their chosen central midfielders, and that provided Arsenal’s attacking trio with a great platform to showcase their talents and they duly obliged.

Based upon their respective career productivity levels, the Arsenal careers of Bellerin, Wilshere, Iwobi and several other players in Arsenal’s current first team squad, could very much be over at the completion of Arsenal’s last 2 Premier League fixtures.  That will very much depend upon who is replacing Wenger and whether that individual possesses the objective ruthlessness to halt Arsenal’s slide into mediocracy, by jettisoning those players who have demonstrated their inability to consistently contribute on the pitch.