It was a naive display from the Gunners as they slumped to yet another away loss, this time going down to Leicester City 3-1.

Pre-match, Arsenal appear to retain the 4-3-3 formation that Wenger employed versus Burnley. That said, the players’ average positioning again indicated that they adopted a formation that more closely resembled a 4-1-2-2-1 set up. 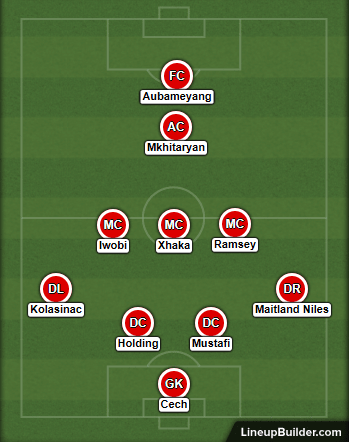 With Leicester City’s recent success built on their ability to cede possession, establish a resolute deep defensive block and counterattack through direct transitional play, and Wenger’s unwavering desire for Arsenal to monopolise possession of the football, it was anticipated that Arsenal would dominate possession. And that is precisely how it eventuated, with Arsenal winning the possession battle 60% to Leicester City’s 40%.

That said, and unlike the match versus Burnley, the poor defensive positioning and performance of Arsenal’s chosen central midfielders were exposed by Leicester City, who did an excellent job at recovering possession in midfield and quickly attempting and executing through passes for Vardy and Iheanacho. This was evidence by:

Given Mavropanos’ sending off after just 18 minutes and Welbeck’s subsequent substitution for Mustafi in response, the respective performances of Mavropanos and Welbeck haven’t been considered due to their limited game time.

It was a busy day for Cech, who, while conceding 3 goals, did very well to keep the score respectable, making 7 saves for the match. On the goals conceded, none where Cech’s fault. Cech also did well when called upon to deal with Leicester’s 24 crosses for the match.

Offensively, Maitland Niles was impressive with an assist from his 3 crosses for the match and 4 transitional and attacking dribbles.

While Mavropanos started the match, his sending off only 18 minutes in and Wenger’s decision to bring on Mustafi to cover the young Greek’s departure, meant the German played the majority of the match in the right centreback position. In terms of the German’s performance, Mustafi demonstrated solid defensive anticipation (2 interceptions) and aggressiveness (2 tackles). That said, a total lack of support and coverage from Ramsey in the right central midfield position and poor defensive positioning and anticipation from right wingback, Maitland Niles, isolated Mustafi and allowed the quick and efficient Vardy to showcase his talents (a goal from his 3 shots, 2 of which were on target, and 1 forward dribble). Disappointingly, Mustafi also wasn’t able to best his English opponent aerially, with both players registering 3 successful aerial duels a piece. That said, Mustafi simplified defensive approach, which resulted in 9 clearances, was a breath of fresh air as his defensive and attacking colleagues repeatedly over complicated Arsenal’s play.

It was another solid defensive performance from youngster Holding. Positively, the Englishman was aggressive in his defending (3 tackles) and showed good defensive anticipation (2 interceptions). That said, like Mustafi, Holding was left isolated thanks to a total lack of support and coverage from Iwobi in the left centre midfield position and poor defensive positioning and anticipation from left wingback, Kolasinac. This allowed the clinical and pacy Iheanacho to display his skills (a goal from his 6 shots, 3 of which were on target, and 2 forward dribble). While Holding did win the aerial battle against his Nigerian opponent (2 successful aerial duels to 1), the Englishman could certainly have simplified his defensive approach more often and focused on clearing his lines (2 clearances).

It was a busy day defensively for Kolasinac, as his opponent Mahrez, seriously tested him down Arsenal’s left flank (a goal from his 3 shots, 2 of which were on target, 3 successful dribbles, 10 attempted crosses, 3 of which were accurate and an attempted through pass). While Kolasinac’s defensive anticipation (1 interception) could have been better, Kolasinac was very aggressive in his defensive approach (5 tackles) as he tried, albeit unsuccessfully, to reduce Mahrez’s influence on the game.

Offensively, Kolasinac was underwhelming, showing limited attacking intent with his dribbling (1 successful forward dribbles) and only 2, inaccurate, crossing attempts for the match.

It was a underwhelming defensive performance from Ramsey, who demonstrated solid defensive anticipatory skills (2 interceptions) but lacked aggressiveness in his defensive approach (1 tackles). Ramsey’s defensive positioning was also poor, as he left too much space between himself and Mavropanos, then Mustafi, and Maitland Niles, which exposed Arsenal’s right wingback and centreback to potential counterattacks from Leicester City down Arsenal’s right flank.

After an underwhelming defensive performance versus Burnley, it was a similarly indifferent defensive effort from Xhaka versus Leicester City. While he was aggressive enough in his defending (2 tackles), Xhaka again failed to showcase his defensive anticipatory skills (0 interceptions). While not as bad as Ramsey or Iwobi, Xhaka’s defensive positioning was still poor, as he left too much space between himself and Arsenal’s centrebacks Holding and Mustafi.

It was an awful defensive performance from Iwobi, who showed very limited defensive anticipation (1 interception) and lacked aggressiveness in his defensive approach (0 tackles). Iwobi’s defensive positioning was also disappointing, as he left too much space between himself and Holding and Kolasinac, which exposed Arsenal’s left wingback and centreback to potential counterattacks.

Conversely, Iwobi’s offensive performance was impressive, with 86% passing accuracy and 3 successful forward dribbles. My only criticisms of the young Nigerian’s attacking performance was his limited transitional passing (2 accurate long-range passes).

It was an excellent performance from Mkhitaryan, who show great goal scoring initiative (3 shots, 2 of which was on target) and a desire to penetrate Burnley’s rearguard via the dribble (3 successful dribbles). His passing creativity was also excellent, with 1 accurate through pass from his 3 attempts.

It was an energetic and trying performance from Aubameyang, who scored a goal from his 6 shots for the match, 3 of which were on target. In addition, the Gabonese striker made numerous well-timed off the ball runs in behind Leicester City’s backline.

Overall it was another naive performance from Arsenal, in which they over committed players in advanced positions, despite going down to 10 men early in the match and playing against a team that is notoriously strong at counter attacking.

Offensively, while Maitland Niles, Iwobi, Xhaka and Ramsey impressed with their transitional play and Aubameyang demonstrated his willingness to shoot, Mkhitaryan was Arsenal’s standout attacker. Despite that, the absence of an extra forward player, combined with Leicester City’s resolute defending in numbers, were hurdles Arsenal couldn’t overcome.

A number of the defensive flaws witnessed from the likes of Ramsey and Iwobi versus Leicester City are not issues that haven’t arisen previously, and the new manager, whoever that maybe, will need to rectify those failings earlier on in his tenure, whether that be through tactical or personnel changes.